Today was our final morning in London. We had our last breakfast at the London Lodge Hotel and brought our suitcases downstairs using the tiny, creaky elevator. Once we loaded up the bus we said our goodbyes to our guide Tiana who was wearing her signature red beret. Even though I was looking forward to having some time to relax at Stratford-upon-Avon, I was so sad to say goodbye to London. I had to keep telling myself that it isn’t really goodbye, it’s more like “until we meet again.” I know I’ll be back to London someday; I truly love the city and feel like I belong there.

After the three hour bus ride we were in the countryside at last! Stratford-upon-Avon is the small town where Shakespeare grew up and spent most of his life. It is quaint and beautiful, just as the English countryside should be. The bus driver dropped us off at our hotel, the Mercure Stratford-upon-Avon Shakespeare Hotel and we went inside to drop off our bags. Each room has a different name on the door, having to do with a different Shakespearean play. Liz and I stayed in the Belmont room and on the walls were paintings of Queen Elizabeth and a scene from Shakespeare’s Othello. This hotel was much roomier than the first and even had three wood-burning fireplaces downstairs. In the evening I enjoyed curling up in one of the big chairs by the fire and blogging, but first we explored the town. 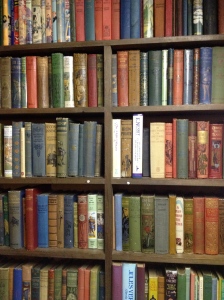 How’s a girl to chose?

Liz and I found a bookshop that sold old books a couple doors down from our hotel. We spent such a long time looking at the lovely old books, and I desperately wanted to buy a book but I simply couldn’t pick just one! After I finally tore myself away from the precious books, we ventured down a side street and found the most wonderful vintage shop that was tucked away in a small corner. The shop was about the size of a walk-in closet and was filled with vintage jewelry, purses, and hats. Sparkling jewelry was absolutely everywhere – hanging from the walls and laying on tables. I have no idea what color the walls were because they were covered in several layers of necklaces. Even the jewelry on the table tops was piled on top of each other. Liz and I started talking to Angie, the shop owner, and she told us a bit about her family and where she finds the jewelry. 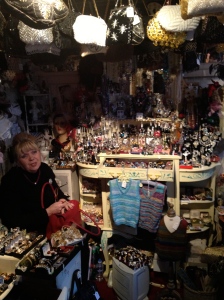 Angie in her shop

While we were talking I saw a lovely cameo choker necklace with two strands of pearls on either side. I told Angie that I thought it was beautiful and she said many people have liked it and wanted to buy it, but it had been too small to fit around their neck. She unhooked it and said I could try it on. Somehow it was a perfect fit! I was so happy I almost started to cry. Angie told me that she made the necklace herself and that it has a real cameo in the center. Best of all, it only cost £7! I told Angie that I needed to run to the ATM to get a smaller bill, but I would be right back to buy it. I was so worried that the little shop would disappear, but luckily it was still there when I came back. She wrapped up the necklace in some paper and made change out of her purse. Before we left, Liz and I said we would visit her again and bring our friends with us. We hurried back to the hotel and made it back just in time for class. 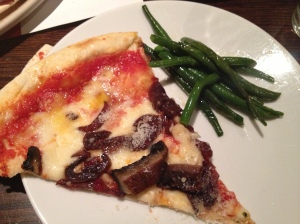 It tasted even better than it looks!

Afterwards, a group of us found a nearby restaurant and tried to get a quick dinner before our show at the Royal Shakespeare Theatre. Our food took much longer than we expected, but it was well worth the wait. Kallie and I split a mushroom and onion pizza that was quite possibly the best pizza I’ve ever had (sorry NYC). After our meal, we dashed down the street to the theatre and watched a modern version of The Merry Wives of Windsor.

The Merry Wives of Windsor set, Act I

I’m so happy that the Royal Shakespeare Company performed our last show of the trip – this was the perfect way to end our theatre tour. I thought the staging was genius. Since the stage was surrounded by the audience on three sides, the actors were really able to fill up the space and use the stage as if they were real people living their day-to-day lives. The sets were realistic and everything appeared from the floor of the stage.

Although Richard III attempted to give the proscenium stage theatre a thrust stage feel by seating audience members along the sides of the stage, the staging still felt more like a traditional proscenium stage because a majority of the audience was still in front of the actors. The Merry Wives of Windsor was a proper thrust stage show because the Royal Shakespeare Theatre was built specifically for Shakespearean plays. Exactly 1/3 of the audience was on each side of the stage and the back of the stage was reserved for large set pieces. The acting was superb and the modern take on Merry Wives made the show easier to relate to. Even though this performance was modern, I think the production gave the audience the feel of an authentic Shakespearean play (even more authentic than Richard III) because of the staging. Afterwards our professors jokingly referred to the play as “The Housewives of Windsor” and that phrase pretty much sums up the play. After the show was over we explored the gift shop (of course) and then we went back to our rooms to unpack. Even though I miss London, I think Stratford may also have found a place in my heart.

Nice to Meet You

Hi there! I'm Kim. Thanks for reading!

Error: Twitter did not respond. Please wait a few minutes and refresh this page.